The Kinkiest $16 I Ever Made 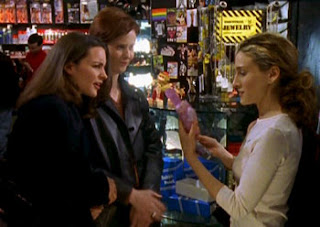 With the possible exception of the people who marry their high school sweethearts, most of us have at least a few bizarre stories that come out of our failed relationships.

When Remus told me this story, we had the following exchange (paraphrased):

Wolfie: So do you still have it?

Remus: Yeah. Do you want it?

(Side note: I realized after the fact that the proper response was probably something along the lines of, "Why would I need that when I've got you, stud," but I'm often bad at picking up cues.)

Remus: Well, I certainly don't want it, so what am I supposed to do with it? Apparently it's a good one, so it seems a shame to throw it out.

Wolfie: Do you know anyone going to a tacky bachelorette party who will need to bring a sexy gift?

Wolfie: You could sell it on eBay since it's brand-new.

Wolfie: Well, I'll sell it, I don't care. But I get to keep the profits.

Less than a week later, the rabbit was on its way in discreet packaging to some unknown buyer, and I was $16 richer. Now, hopefully one of his other exes left behind a sex swing still in the box, complete with installation hardware, so I can make some serious cash.
Posted by Wolfie at 10:00 AM