My Subconscious Hates Me

I don’t always dream, but when I do, I dream that Remus is an utter asshole.

It’s not surprising that Remus would make frequent appearances in my dreams, but for reasons I’ll never understand (but that some psychology undergrad would have a field day with), when he is featured he more often than not is treating me like garbage and/or leaving me. Why these visions would manifest now with him, when in the past I have actually dated guys who actually did treat me like garbage and/or left me and never got dream cameos, I don’t know. I say it’s my subconscious waiting for the other shoe to drop, worried that things are going just a little too well for me. Remus thinks my subconscious can “go fuck itself” (direct quote).

Some of the dream behaviors I can recall:

There have been several others, but I think you get the gist that they’re all terrible and conclude with me miserable and alone. Though there may be a light at the end of the subconscious torture tunnel, as I recently had a dream where Remus simply put on one of my shirts and I yelled at him to take it off before he stretched it out.

“Did I then promptly dump you?” he wearily asked when I shared this with him.

“Nope! This was just a run-of-the-mill cross-dressing dream!” 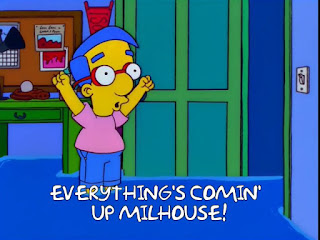