Not So Great Moments in Romantic History

While not every potentially romantic encounter I’ve had is worthy of its own story, there are several moments that deserve to be documented.

There’s the guy in Boston who I met for a casual lunch who kept his sunglasses on the entire time inside the (not especially bright) café. He would let the conversation frequently lapse into silence by simply not responding to a question I asked, choosing instead to creepily leer at me from over the top of his shades. Needless to say I never went out with him again and we never even spoke again until many months later when he randomly pinged me online with the message, “Do you like apples?” I didn’t respond and blocked him, even though yes, I do like apples (preferably in pie form).

There’s the guy I had dinner with who spent most of the evening talking about his beloved dog. He worked in an industry known for not paying well, but had his own place. I, also working in an industry known for not paying well, was sharing a house with four male roommates, so I asked him in all earnestness how he managed to afford to live alone. He responded that after he paid his rent, his utilities, and covered whatever the dog needed, he was usually left with $15-30 each month. Ignoring the fact that this meant he had absolutely no savings to speak of and would be completely screwed if am emergency situation should arise, I asked how that didn’t put a damper on his social life. He told me that all he wanted was to find someone who was happy to hang out at home with him and his dog, so it didn’t really bother him. I suppose, at its core, that’s all most of us are looking for, but how you don’t see that buying a large pizza will cause you financial ruin as an issue is beyond me.

There’s the guy in New York who worked backstage in some capacity at a theater. This meant his working day started around 2:00 in the afternoon and ran through the night, and his days off were Sunday and Monday. I was a typical Monday-Friday 9-5er, so aligning our schedules for just the first date wasn’t easy (it wound up being a Monday night dinner). We had a good time and agreed to meet up again. I suggested we do something the following Sunday. He said that he liked for Sundays to be his day to do nothing. Then I suggested that he pick a weekday--any weekday--to come into the city a bit early and I could meet him for a bite to eat during my lunch hour. He said that he didn’t like getting up or traveling to the city any earlier than he absolutely had to. Annoyed, I suggested that he should only date women who also work in the theater industry with the same wonky schedule, because I wasn’t going to be satisfied with a relationship exclusive to Monday nights. This apparently pissed him off as he copped an attitude with me for being “so inflexible.”

There’s Octopussy. In the aforementioned house in Boston that I shared with four male roommates, three of them were perfectly nice guys in serious relationships, so I rarely saw them, and when I did they were great roommates who respected everyone’s space and even let me have my own bathroom to myself. And then there was Octopussy. He was English and living here on an expired student visa, working at a cater waiter for special events at the university he never managed to graduate from. His hobbies included sleeping all day, not showering regularly, making a mess in the kitchen and leaving it for someone else to clean, and trying to shag his way through the city of Boston before he inevitably got kicked out of the country.

He campaigned hard for a while to get a dog for the house, for the sole reason that “dogs are a great way to meet women.” When none of us were interested in this endeavor, he said he’d get one on his own, until one of the other roommates said that according to our lease, pets weren’t allowed, and that he was allergic to dogs, so we couldn’t have one in the house anyway. “I’m also allergic to horses, so don’t ask if we can get one of those, either.”

One Friday night I found myself with the rare treat of having the entire house to myself, so I decided to celebrate by watching TV in the living room while wearing my flannel pajamas. Octopussy eventually stumbled home after a catering gig and flopped on to the couch with me, asking if I had anything to drink. I said I had some mediocre booze left over from a recent weekend visit to an out-of-town friend if he was interested in that, which of course he was. Barely one drink in, he began rubbing my back and declared that this would be a banner night of “drink a little, watch TV a little, and hook up a little.” I rolled my eyes and retreated to my bedroom, wondering when immigration services were going to deport this jackass already.

The incident was never spoken of and he never tried anything again, so I just put it behind me. He eventually asked if he could use my computer while I was at work to send emails--he didn’t have his own computer, no surprise, and this was a few years before smartphones were a thing--and I said fine, then after a couple of weeks started coming home to pornographic fan-fiction-esque entries left up on my screen for me. Luckily, I got a raise at work around this time and could afford to get my own place. Which led to me meeting…

There’s the real estate agent in Boston who helped me find a new apartment. He was around my age and really cute, so when he asked me out I was beyond delighted. Unfortunately, our date didn’t go so well as we didn’t have a lot in common to talk about, he wouldn’t stop trying to unnecessarily touch me, and he gave off a very weird vibe, primarily when we stopped into a bookstore and he saw a display of tiny books each featuring the origins and historical insights about a specific name. He wanted to get one for his brother’s new baby, but couldn’t remember exactly what said baby’s name was, and proceeded to get into an argument with the salesgirl about their return policy if he happened to buy a book featuring the wrong name. When he dropped me off at home I thanked him for dinner and tried to quickly duck inside, but he caught me by the elbow and actually said the words, “Let me give you a kiss,” and then awkwardly tried to make out with me while I kept my mouth clamped shut, resulting in him licking my teeth.

When he called asking for a second date, I straight up told him I wasn’t interested and didn’t hear from him for at least six months. During this stretch of time an on-again, off-again bullshit excuse for a relationship that I foolishly dragged with me from college into the real world finally blew up in my face, leaving me feeling every shade of hurt, angry, embarrassed, and vulnerable. Teeth Licker must have sensed this somehow, as he popped up out of the blue to call me and asked me out again. Not really wanting to go, but feeling low enough to say yes anyway, I did stipulate that I was only interested in hanging out as friends and wasn’t looking to date anyone. He agreed, but then tried to maul my face again at the end of another night filled with absolutely no chemistry of any kind. When he called the following week looking to go out again, I informed him that I was having my wisdom teeth removed that week (true story) and would call him after I recovered. And then didn’t.

There’s the guy in DC who I met for one date and had a really good time with, but felt absolutely zero physical attraction to. When he asked if I’d like to go out again, I said sure, but that I was really only interested in friendship with him. He told me pointblank, “Thanks, but I really need a girlfriend.” Fair enough, buddy.

There’s the guy who was in Alcoholics Anonymous. This didn’t bother me because A. good for him for realizing he had a problem and getting the help he needed, and B. I’m not a huge drinker anyway, so it wouldn’t put a damper on my lifestyle. What did bother me, however, was that he had traded his addiction to alcohol for an addiction to adrenaline. He belonged to the fitness cult that is CrossFit, and on the few dates we went on all he talked about was his daily visits to his CrossFit gym, how much he was lifting, how far he was running, and how he was in training for Tough Mudder, an extreme physical challenge that people have actually died while doing. It got to the point where every time he would talk all I could think of was this: 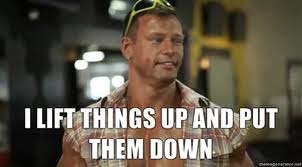 When he eventually informed me that between his daily AA meetings and CrossFit workouts he really didn’t think he had time for a relationship, I was neither surprised nor particularly disappointed. I sometimes wonder if he’s continuously trading one addiction for another and will eventually wind up with a massive collection of porcelain dolls or unable to stop smelling sweaty gym socks.