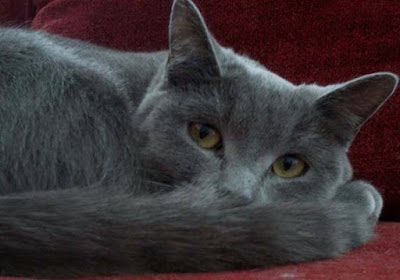 Way back in 2003, when I was one year out of college, I received a large enough raise at work that would allow me to afford an apartment on my own (in Boston at the time). So I happily bid farewell to the house I had been sharing with four roommates and got my very own one-bedroom apartment, which I still mark as my first big grown-up decision.

Not long after moving into that place, I made my second big grown-up decision to become the only kind of parent I would ever want to be, and adopted two three-month old kittens; a brother and sister pair who I named Capote (after author Truman Capote) and Moneypenny (after the secretary from the James Bond movies). And my Grinch heart grew three sizes that day as I instantly fell in love with my little furballs, crazy cat lady stereotypes be damned.

After an initial tentative warming up phase, they both turned into hyper affection bundles of unconditional love. I tried to train them not to sleep on my bed with me in a futile effort to keep everything single thing I owned from being covered in cat hair, but wherever I was, that’s where they wanted to be, and they would not be denied nighttime snuggles. Even on the occasions where I would soak in the bathtub they would hang out on the bathroom floor, calmly waiting for me to relocate to a place where they could easily crawl all over me.

As they got older, Capote grew into a normal-proportioned cat and eventually got too big to comfortably be in my lap (not that it stops him from still trying at times). But Moneypenny kept her dainty figure and kitten-like look, coupled with her chirpy high-pitched “meow” that she employed often as the chattier of the two. Throughout her entire life I don’t think she ever weighed more than 9 pounds, making it easy to scoop her up one-handed, where she would then cling to my shoulder like a monkey to be carried around.

Over the years we went through a lot together. A move from Boston to New York City that introduced a new human into their daily routine as I shared a place with my college roommate. After 8 years there, I uprooted us for a brief stint in Washington, DC, then to Chicago, which I drove to over two days, giving the fuzz twins their one and only taste of hotel living (it was well-received, even though I wouldn’t let them raid the minibar). Then in Chicago I met Remus, who quickly became a regular fixture in my apartment, and they easily warmed up to him; most surprising from Moneypenny, who was always wary of strangers.

And then came the big test: cohabitating with Remus and his cat, Ara, who was used to being an only child. After a tenuous few months, the three animals settled into what I would call a state of begrudging acceptance. We liked to joke about how our pets outnumbered us, referring to our home as “the zoo,” but it was a good balance. Ara (the oldest cat) was the cranky grandma, Capote was the independent guy, and Moneypenny, with her almost comically small stature, was the baby.

Not long after moving in together, we noticed that Moneypenny seemed to be constipated. A trip to the vet gave us the suggestion of a high-fiber diet and some over the counter meds we could try. But the problem never went away, reoccurring many times for the next year and a half despite many vet visits, different diets, and various medications. It was finally suggested that we take her to a veterinary surgeon for a consult, where we learned that she had a perineal hernia. Without hesitation I agreed to the surgery to correct it, and after an overnight stay brought home my poor girl--who had lost almost half her body weight throughout this ordeal--with a completely shaved backside, a cone of shame around her head, and a strict regimen of drugs to be administered.

When she was clearly backed up again a few days after her hernia surgery we had to take her back to the surgeon, where the news this time wasn’t nearly as simple. A neurological disorder that was causing her digestive tract to not work properly was suspected, and a trip to another animal hospital to get her an MRI was suggested as an option, but when I choked out the difficult question of if we got the MRI and it was indeed a neurological malfunction, was there anything that could be done for her, the harsh answer was no.

“If she were human, we would give her a colostomy bag,” our sympathetic surgeon explained, “but, unfortunately, she’s a cat.”

So, just a couple of months shy of her 13th birthday, Remus and I made the heartbreaking decision to have Moneypenny put to sleep. We had both had beloved childhood dogs put down, but this was the first time either of us were on the front line to make the call and be there when it happened. We jointly sat with her in the hospital room, saying final goodbyes while she contently purred in my arms. I always knew I wouldn’t have it in me to hold either of my cats as they were put down, but Remus was adamant that the last thing Moneypenny saw was one of us, so while I sat in the car sobbing he stayed with my kitty girl as she slipped away, an gesture so selfless and loving that I’ll never forget it.

Logical pet owners know going in that they will (hopefully) outlive their animals and eventually have to make hard choices at the end, but knowing doesn’t make it any easier when the time comes. Losing Moneypenny feels just like losing any other beloved family member, and while we always joked that three cats was too many, two doesn’t feel complete (but no, we will not be getting another any time soon). Bedtime is the hardest; whenever I would crawl within the sheets she would hop up within seconds, no matter where she was hanging out, eager to snuggle up and incrementally push me to the far edge of the bed as the night progressed. Now I can stretch out and take up my full half of the mattress, and it sucks.

But life goes on, and every day hurts a little less. Ara never liked the new female intruder, so she’s not fazed, and Capote doesn’t seem to be behaving differently now that his sister is gone. A nearly 13-year run isn’t too bad for a pet, which I have to keep reminding myself, and ultimately Moneypenny was loved deeply by someone who doesn’t love easily or often, so I hope she felt that in the end, as best as a cat can feel anything.

RIP, little one. Thank you for making my early grown-up years a lot warmer and exceptionally fuzzy. 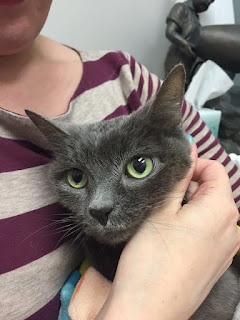